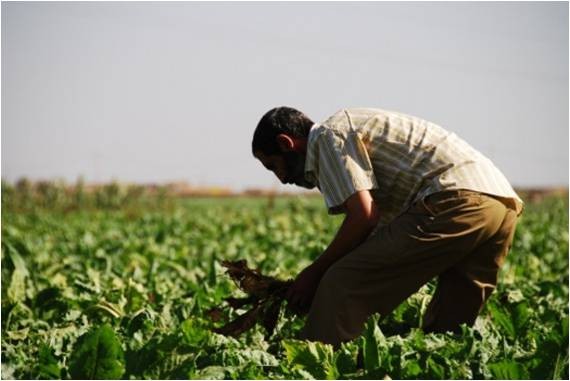 Determining just how much water a field of tomatoes near Berkane, Morocco, needs on a Thursday morning in January involves a myriad of calculations–and when water is scarce, it’s all the more important to get it right. Over the past few years, the Morocco Economic Competitiveness program (MEC), in collaboration with the Ministry of Agriculture and Ministry of Water and the Environment, has made efforts to improve water efficiency on local farms–by encouraging the installation of drip irrigation systems, and offering irrigation advice based on current weather conditions.

In 2011, MEC–which is funded by USAID and implemented by DAI–installed nine automated weather stations in two regions of Morocco, to help determine how much water should be applied to surrounding fields.  Its staff would then send text messages to farmers with advice such as, “Tomatoes need 2 cubic meters of water per hectare today.” The problem was that all of these calculations had to be done manually, and most of the farmers didn’t have metering units in place.

Last year, MEC decided to call Souktel for help: It wanted to customize these alerts for farmers in different regions, send and receive irrigation data on a much larger scale–and, most importantly, have everything happen automatically. With these instructions in hand, Souktel’s software developers built a system that uses the weather data–and a complex algorithm that calculates different crops’ water needs—to deliver information to farmers instantly.

“The process is a lot more efficient now,” says Andrew Watson, Chief of Party for MEC. “The farmers just…send an SMS saying what their pumping capacity is–and based on the weather data for their location, they’ll get an automated message back with specific instructions saying, for example, ‘For tomatoes, you need to turn the pump on for two hours’.”

Since its launch, about 600 farmers have signed up for the service. On average, they can achieve an estimated water savings of as much as 60%, by following the text messages’ advice. “That’s phenomenal,” says Watson.

Meanwhile, another USAID-funded MEC initiative had Souktel working with the Ministry of Agriculture and mobile network Méditel to distribute daily price information for hundreds of agricultural products via SMS. Farmers and produce sellers can register on their mobile phones by text message, entering a particular crop (ie. “Tomatoes”) and a particular market (ie. “Had Dra Essaouira”). After signing up, they’ll receive automatic daily updates–enabling them to maximize their income by selling crops at the best possible price, instead of a below-market rate.

Souktel software project manager Michael Moszczynski travelled to Morocco to help create this service, which represents one of the country’s few public-private partnerships in the mobile sector. He says that while market-price services have existed in developing countries for some years, “this one is much more comprehensive. The entire system works in real time–prices are sent out the minute they’re collected at the markets. And since it’s structured as a subscription, the cost to the farmers will be negligible–they sign up with a single SMS, then receive information for the entire growing season.”

Watson says that, despite it being early in the game, both of these projects have been a huge success. “Mobile phone ownership in Morocco is more than 100% [with many Moroccans subscribing to more than one network], so it just makes sense to use SMS technology like this,” he says. “There’s been great uptake so far–and preliminary surveys show people are really using the information, saving water, saving money, becoming more competitive.”