Souktel’s management team combines more than 20 years of experience in IT-based solutions for economic growth and humanitarian aid. Team members are based in Souktel’s Middle East and North America offices, with frequent travel across the Arab World and East Africa. Our team members consult frequently with a global advisory board of non-profit and private sector leaders.

Jacob leads Souktel’s growing team, building on his past experience managing economic development and emergency relief projects for the US Agency for International Development (USAID) and the Canadian International Development Agency (CIDA). Fluent in Arabic and French, Jacob has worked in the aid and development sectors in the Middle East, East Africa, South Asia, and the Caribbean. He is a frequent panelist on technology and development–with speaking engagements ranging from the GSMA Mobile World Congress to the World Bank Human Development Forum. He has written articles on mobile technology and development for the MIT Innovations Journal, CNBC Online, and UNICEF’s “State of the World’s Children” report, among others. His work as a Souktel co-founder has been profiled by The Wall Street Journal, Forbes, Fast Company and the UK’s Guardian newspaper. Jacob holds an Ed.M. from Harvard University, where he also served as a Harvard Reynolds Foundation Fellow in Social Enterprise from 2005-06.

Yazeed leads the development and implementation of Souktel’s growth-oriented strategic framework. Additionally, he continues to serve as an advisor to partners and clients on matters related to the management of digital-based opportunities on projects and in organizations. He also drives Souktel’s consulting practice which advises clients in the fields of ICT for development and mobile for development. He has extensive experience in the area of technology utilization for disaster and emergency response as well as economic growth and employment. Yazeed holds a Master’s degree in economics from the Goethe University in Frankfurt-Germany as well as a higher degree in urban planning from New York University. He is based in Amman-Jordan and is fluent in Arabic, English, and German.

Maggie leads Souktel’s relationships with clients and partners across the US. Before to joining Souktel, she spent over 10 years at international non-profit IREX, where she managed media programs and global new business development–serving most recently as the Senior Development Officer for IREX’s Education Programs Division. Prior to IREX, Maggie worked at IFES (the International Foundation for Electoral Systems) on programs which focused on civic education, political party development, and election administration–and at USAID’s Europe and Eurasia bureau. Maggie brings extensive experience in technical assessments, proposal management, and Middle East/North Africa project development to the Souktel team. Maggie holds a BA in history from the University of Michigan and an MA in International Affairs from the George Washington University.

Michael leads scoping and design for new client projects, building on his expertise in web application development, interactive voice response (IVR), and network connectivity integration. His experience in the mobile industry includes working with large companies like VeriSign, where he designed content delivery applications for clients like MTV and TimeWarner, as well as smaller startups such as mQube. Michael is a native of Canada and a graduate of the University of Waterloo. He is a fluent speaker of multiple languages including English, Polish and Arabic.

Based in Washington, DC, Hillary manages outreach to clients for new funding opportunities. Prior to joining Souktel, she served as a Business Development Manager and founding member of the Corporate Partnerships Practice at Chemonics, supporting the largest private implementer of US international development projects to globally expand corporate client development. She brings a technical background in enterprise development, and has worked on development projects in Africa, Asia, and the Middle East. She holds a B.A. in Communications Studies from Westmont College in Santa Barbara, California.

Specializing in US Government, DFID and UN policies and procedures, Melanie manages Souktel’s finance, accounting, and compliance activities. With over 20 years of experience providing financial oversight to leading tech companies and venture capital funds, Melanie brings a detailed knowledge of cost accounting standards and US GAAP and IFRS audit requirements. Prior to joining Souktel, Melanie served on the finance team of Northwater Capital ($1bn AUM) and Northwater Patent Funding Corp. ($100m annual operating budget). Previously, she led finance and accounting for digital marketing leaders Smak (whose clients include Google and Toyota) and Marketlink (with clients including Unilever and Knorr/Lipton). Melanie studied accounting at the University of Toronto and under the Certified General Accountants/Chartered Professional Accountants of Ontario.

Steve leads digital solution design and delivery for Souktel projects across Asia, Africa and the Middle East. Before joining Souktel, he served as a Program Manager at the Kaizen Company, overseeing US government-funded projects in West Africa and the Middle East.  Previously, Steve served in a range of roles at Dimagi, a software company specializing in mobile application development for frontline workers delivering health, agricultural, and other services in Africa, Asia, and Latin America. Steve has also managed USAID-funded economic growth projects in the Middle East region for Chemonics International, overseeing a combined budget of over $80 million. Steve holds an MSc in Development Studies from the London School of Economics and Political Science, and a BS in Foreign Service from Georgetown University. He speaks English, French, and Spanish and is conversational in Egyptian Arabic.

One of four winners of the inaugural King Abdullah Award for Youth Innovation and Achievement at the World Economic Forum for the Middle East, Lana manages digital solutions projects for Souktel clients across Africa and Asia. Before helping found Souktel’s non-profit branch in Palestine, Lana worked in the marketing department at mobile network Wataniya, a subsidiary of Qatar-based Ooredoo. A business administration graduate of Birzeit University in the West Bank, Lana was the only Palestinian named to Arabian Business magazine’s Top 30 Under 30 social venture leaders in 2009.

Tania manages digital solutions projects for Souktel clients across Africa and Asia. Prior to joining Souktel, she worked as a Community Mobilizer for Madrasati, a national education initiative founded by Queen Rania of Jordan. Previously, Tania also worked with Hikayat Simsim, the Arabic version of educational TV program Sesame Street, in Jordan. Tania holds a BA from Taylor University in Indiana.

Based in Ramallah, Luna manages digital solutions projects for Souktel clients across Africa and Asia. She holds PMP and S​crumMaster ​(CSM) certifications, and specializes in Agile management methodology. Before joining Souktel, Luna served as a Program Officer at ​AMIDEAST​, the Arab World’s leading provider of US training and education courses. Previously, Luna worked as a Program Coordinator for health sector projects of Chemonics International, the largest private implementer of US international development assistance. She holds an M.S. in Project Management from Golden Gate University in California.

A specialist in Management Information Systems, Yacoub manages digital solutions projects for Souktel clients across Africa and Asia. Prior to joining Souktel, he worked as a Program Officer for the International Youth Foundation’s USAID-funded Youth Entrepreneurship Development project in Palestine. Previously, he oversaw Health Information System delivery for Chemonics’ USAID-funded Palestinian Health Sector Reform & Development project. Yacoub holds a M.S. in Management and Information Technology from the University of North Carolina, and a B.Sc. in Computer Information Systems from North Carolina’s Guilford College. 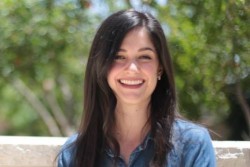 Thabet Amer is a senior networks and systems engineer with expertise in designing Interactive Voice Response (IVR) solutions. At Souktel, Thabet develops new IVR products and services for Souktel clients across the Middle East, Africa and Asia. In addition, he manages network and server infrastructure, ensuring that digital services run smoothly across the 20+ countries we serve. Prior to joining Souktel, Thabet served as a System Administrator and Architect for the UNODC, the United Nations Office on Drugs and Crime. Thabet holds a Bachelor’s degree in Computer Systems Engineering from Birzeit University in Palestine.

Mohammad leads the design of Souktel’s front-end user interfaces and user experience flows. Before joining Souktel, he served as a Front End Engineer at Harri.com, a US-based job recruitment platform with over 100,000 users. Previously, he worked on the design team at Mixberry Media, a global provider of mobile content solutions for brands like Netflix and McDonald’s. Mohammad holds a Bachelor’s Degree in Computer Science from Al-Najah University in Nablus.

Ragheb focuses on software product development for Souktel clients across the Middle East and Africa. Previously, he served as a System Analyst and Developer for GIZ, the German government’s leading aid and development implementer. Ragheb has also worked as a Designer/Developer for UNDP and the Palestinian Ministry of Planning, building national-level monitoring/evaluation platforms. Ragheb holds a BSc in Computer Science from Palestine’s Birzeit University.

Ameed designs front-end user interfaces and user experience flows for Souktel projects across the Middle East, Africa, and Asia. Prior to joining Souktel, he worked as a UI developer and UX designer for firms ranging from US education technology leader SchoolCity, to South African software leader FullFacing. Ameed holds a Bachelor’s Degree in Computer Science from Al-Najah University in Nablus.

Issa specializes in web and server-side development for Souktel projects across Asia and Africa. Before joining Souktel, he served as a Senior Web Developer at Harri.com, a US-based job recruitment platform with over 160,000 users. With more than 5 years’ experience in the Middle East startup ecosystem, Issa has helped launch two e-commerce platforms in the real estate and event planning sectors. He holds a B.Sc. in Computer Science from Palestine’s Birzeit University.

Ahmad Said is a software engineer with extensive experience designing mobile solutions, particularly for the development sector. Ahmad develops new mobile applications for Souktel clients across the Middle East, Africa, and Asia–with a focus on open source platforms like RapidSMS. Ahmad holds a M.Sc. in Computer Science from Al-Quds University in Abu Dis, Palestine, where he has also worked as a software developer. 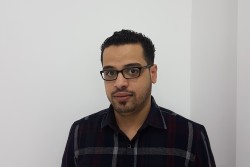 Mohammad develops mobile apps for Souktel clients across the Middle East, Africa and Asia. Previously, he worked on the app development team at Mixberry Media, a global provider of mobile content solutions for brands like Netflix and McDonald’s. Mohammad holds a Bachelor’s Degree in Computer Systems Engineering from Palestine’s Birzeit University.

Hanaa oversees Quality Assurance for all new software products. Previously, she worked as a QA Engineer for Palestine-based firm Exalt—a provider of mobile solutions to clients which range from Alcatel-Lucent to HP. Hanaa holds a B.Sc. in Computer Science at Palestine’s Birzeit University, and is a Cisco Certified Network Associate. 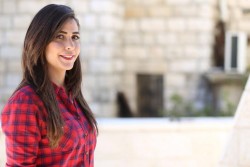 With more than 10 years of marketing expertise, Amber oversees Souktel’s regional media campaigns and outreach. Prior to joining the Souktel team she worked at leading North American advertising firms like Cossette, where she directed online marketing campaigns for Canadian mobile network Bell Mobility, among other major clients. In 2009, Amber’s new media work earned her a Dubai Film Festival “Young Arab Producers” honor. Amber holds an M.B.A. from the University of Calgary in Canada. 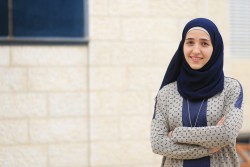 Dua oversees Quality Assurance testing for new software solutions. Previously, she worked as a Software Engineer at ASAL Technologies, a developer of software solutions for Cisco, Microsoft, Intel and HP. She holds a Bachelor’s Degree in Computer Science from Palestine’s Birzeit University.

Nasmia supports Souktel’s Ramallah office team in logistics, procurement, and reporting. Before joining Souktel, she served as an Administrative Assistant for the Palestine office of the International Youth Foundation, a US-based global non-profit which has delivered projects in close to 100 countries. Nasmia holds a BA in Arabic-English translation from the American University of London.